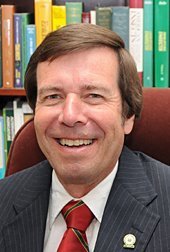 Zalom is nationally and internationally renowned for his leadership developing research-based integrated pest management (IPM) programs. He is also recognized for his adeptness in mobilizing and coordinating different and often divergent scientific, stakeholder and governmental groups to achieve a common goal of industrywide improvements in pest and pesticide management for individual crops such as almonds, tomatoes, strawberries, grapes and olives.

IPM benefits most from a transdisciplinary approach to developing a control program, especially one that places the plant at the center as the “unifier of knowledge,” so that the plant’s own particular biology and its special defenses can be brought into play, Zalom explained.

Under Zalom’s guidance, the University of California Integrated Pest Management Program became recognized as the premier program of its type as he reinforced the need for sustainability in the pursuit of managing pests. Today, he serves as distinguished professor and extension specialist in the Department of Entomology and Nematology at UC Davis.

For example, Zalom first helped develop and then implemented a pest management program for the navel orangeworm—a key almond pest—that has been widely adopted by California growers. As a result, damage from this pest dropped from 8.8 percent annually to less than 1.5 percent while industrywide insecticide use for navel orangeworm control decreased by more than 40 percent.

He also led a multidisciplinary research and extension effort in the 1990s that reduced organophosphate dormant spray use in almonds by more than 50 percent and ultimately by 90 percent across California orchard crops. Organophosphates had been running off into the Sacramento River after winter rainfalls, and cuts in their use helped bring the river back into compliance with the Clean Water Act.

The Agricultural Research Service (ARS) established this memorial lectureship in 1968 to honor the memory of Benjamin Y. Morrison (1891-1966) and to recognize scientists who have made outstanding contributions to horticulture and other environmental sciences and to encourage the use of these sciences. Morrison was a pioneer in horticulture and the first director of ARS’s U.S. National Arboretum in Washington, D.C. A scientist, landscape architect, plant explorer and breeder, author and lecturer, Morrison advanced the science of botany in the United States and fostered broad international exchange of ornamental plants.