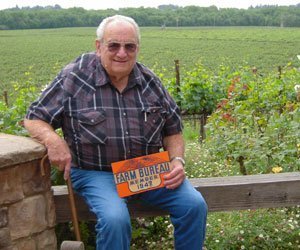 Healdsburg, Calif., (August 14, 2017) – Joe Rochioli Jr. was honored for his outstanding Achievements in FFA and Agriculture by the Healdsburg High School FFA Ag Boosters Board on June 24, 2017 at their Shrimp Boil and Bluegrass fundraiser at Jackson Family Wine’s Richard’s Grove. More than 150 guests turned out for the 2nd annual event, including leaders from the business and agricultural sectors. Guests dined on Southern Shrimp and treats prepared by Ken Rochioli of KR Catering, raised funds through live and silent auctions, and danced to Rovetti and the Meatballs Band.

Joe Rochioli Jr. was born in 1934 to Neoma and Joe Rochioli Sr. and grew up on Westside Road working on the family farm. When Joe was young, his dad was a top-quality hop grower, farming Fenton Acres, a 125 acre farm on what is now Westside Road. Joe’s Italian immigrant family worked very hard and aspired to own the land they farmed. Joe entered Healdsburg High School in 1949 and was one of the first students in the Healdsburg FFA Chapter in 1950. That year he showed 2 Veal Calves that were sold at auction to a local family and the Armor Star Meat Company. During high school, Joe showed many animals at the Healdsburg, Sonoma County, and Sonoma-Marin fairs.

As the top student in FFA Joe was awarded a jersey calf name Rotary-Ann by the Healdsburg Rotary club. Joe loved that calf and raising animals. At one time he had 10 Herford cows, one Herford bull, and 80 sheep. At Healdsburg high, Joe played four years of baseball & football and was student body vice-president. He also played professional baseball for the Prune Packers while he was a senior at Healdsburg. Joe graduated from high school in the summer of 1952 and went straight to Cal Poly.

Joe left for San Luis Obispo with $350 in his pocket, two friends and his 1941 Chevy truck. Joe attended Cal Poly from 1952 to 1956 studying animal sciences and he took as many agricultural classes as he could.

At Cal Poly, Joe did what all Mustangs do, he “learned by doing.”

He worked very hard in and out of the classroom, holding many jobs including at the meat department, as the University fed all the students. He also worked at the “Flying A” fuel station and earned .85 cents an hour doing construction work on military housing trailers. Joe received his State Farmer Award during his first year of college.

Joe played baseball for 4 years at Cal Poly and also later in the U.S. Army. After graduation, he returned to Healdsburg from Cal Poly to again help his dad on the family farm. He was soon married and had two small children, Tom and Becky who, along with their families, are with us this evening.

Joe again left Healdsburg after being drafted into the United States Army where he was quickly promoted. He spent most of his time at the Walter Reed Hospital in Washington DC where he researched radiated food and vitamin deficiencies in K rations, what we today call MRE’s.

Joe left the service and returned to Healdsburg in 1959 to again farm the land he loved. Not many young people stayed committed to Agriculture, but Joe did. After “hopps went to hell”, Joe’s family started farming beans and eventually in 1959, wine grapes. Joe had many ideas about what varietals of grapes would do well on the land and also be financially profitable.

Like many multi-generational farming families, sometimes his dad agreed with him, and sometimes not.

Joe was a passionate farmer and in the mid-1960s fought open price contracts; Joe was a Founder of the North Coast Grape Growers Association that through political lobbying, fought unfair pricing of grapes and paved the way for today’s standards of Wine Grape pricing contracts.

Joe has received many awards including the Vocational arts trophy from Healdsburg high school on display here this evening. He’s also in the Healdsburg High School Sports Hall of Fame. Joe served on the Healdsburg Fair Board for over 25 years and was Parade Marshal in 1984. In 2003, Joe received the inaugural “Copia Award” as Wine Grower of the Year, a national recognition. In 2009, Joe and his wife Vivian received the Sonoma County Harvest Fair Lifetime Achievement Award.

The name Rochioli is synonymous with premium wine grapes and wine. Joe’s understanding of soil types and terrain led him to planting one of the most famed vineyards in Sonoma County.

Today, Joe oversees the farming of over 140 acres of premium wine grapes in the Russian River Valley. These grapes go into the bottles of many top quality producers and to the Estate wines so expertly crafted under the Rochioli and J. Rochioli labels.