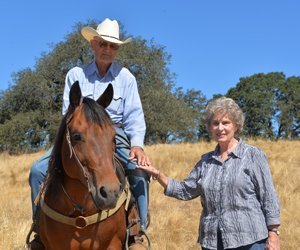 Geyserville, Calif., (August 9, 2017) – Mark Vanoni emigrated from Switzerland with his wife Angelina in the mid 1800’s. They settled on the Central Coast and had a dairy below the Hearst Castle. However, a severe drought in 1898 caused the family to lose their dairy.

The Vanonis searched the state for a new ranch, seeking a piece of property with ample water. They purchased their Geyserville ranch in the first couple years of the 1900’s, and the family still has the deed from 1902. The ranch was near the Russian River (although the family recalls that at the time their relatives purchased the property, the river didn’t run year round) and had natural springs throughout the property.

The family spent 40 years raising dairy cattle on the ranch, shipping butterfat by train. During the same time, the valley floor was planted to grapes and three acres of prunes. The price of grapes was insignificant and the family realized they weren’t making a profit and pulled out all their grapevines to increase their grazing land. Mark’s grandson Ed, the current ranch owner, was still farming when they had grapes. However, his wife Johanna described Ed “as just not a dirt farmer.” Ed recalls that some relatives wanted to sell the ranch, but he purchased 1,500 acres from his grandmother in 1950. He married Johanna two years later who managed the ranch while Ed was away in the Army.

For Ed, the ranch was always a passion. Growing up, he lived in Geyserville, but never missed an opportunity to help out on the ranch. Ed and his father began to rent the property from Ed’s grandmother and they converted the ranch to beef cattle, crossing Shorthorns with the dairy cattle they already had. They switched to Herefords after having a hard time selling Shorthorns and later moved on to Angus, which the family still raises.

“I was always interested in working on the ranch,” said Ed. “Always coming up to visit my grandparents on the dairy, and as soon as I got my driver’s license, I drove up every weekend. I was always fixing fence!”

In addition to raising cattle, Ed and Johanna developed a reputation throughout Sonoma County and beyond for their ability to train cutting horses. The couple worked side by side to train award winning cutters which they used as a supplemental form of ranch income for more than 50 years. Ed recalled seeing his first cutting horse in 1949 at Cow Palace when he was in college. Johanna, who grew up in San Mateo, learned her skills by exercising horses in the Bay Area. Over the course of their training career, Ed and Johanna watched as the cutting horse industry evolved from ranch horses to wealthy owners.

In addition to training horses, they ran approximately 10 Quarter Horse broodmares and raised stallions. Today, Ed and Johanna continue to manage the ranch and run approximately 100 pairs of Angus cattle. They rotate their cattle on large pastures and keep just enough cattle to take care of themselves.

Ed and Johanna have four children Adriane, Mark, Yvonne and Calvin who are all involved in the ranch. The Vanonis expect their children to take over the family property, but said that what the four do with the property is up to them.