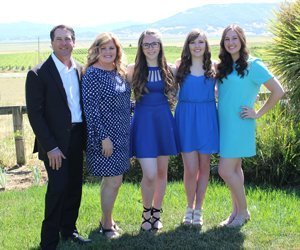 Petaluma, Calif., (July 6, 2017) – The Gambonini family has been farming in Petaluma for nearly 150 years, passing down their family ranch off Lakeville Highway for the last 104 years. Frank Gambonini runs the ranch alongside his wife Stacey, and the couple has three daughters who are actively involved in the ranch and the dairy industry.

Frank’s great great-grandfather, Battista Gambonini, was an Italian-Swiss immigrant who travelled to the U.S. via ship and flatcar. When he arrived in Petaluma, Battista spoke no English and worked for nine years as a ranch hand before leasing his own property in Marin. Battista purchased his first ranch near Bodega Bay in 1908. His neighbor, Paulo Dado, was also a Swiss immigrant and the two met repairing fence lines only to discover that Battista’s son and Dado’s daughter had been born on the same day. Twenty seven years later, their children, Silvio and Evelina married, and together they purchased the family’s current ranch on Lakeville Highway in 1913.

The family churned their milk into butter and sold it heavily salted to merchants in San Francisco. The Gamboninis and Dados also brought their butter to town via horse and wagon every two weeks.

Frank and Stacey have three daughters: Francesca who recently graduated from Cal Poly and will be attending Penn State in the fall to pursue her master’s degree in Animal Science concentrating on dairy reproductive science; Alex who will be a junior at Cal Poly this fall is studying dairy science and agribusiness; and Samantha who will be attending Petaluma High School this fall as a freshman where she plans to be actively involved in FFA. The dairy was converted to organic in 2007 and the family milks about 270 head. They have approximately 600 cows total, all of which are Holsteins except a few Brown Swiss and Jerseys that are their daughters 4-H and project animals.

Stacey was born and raised in Chicago and said her outsider’s point of view shows her how unusual but incredible their family’s situation is. Stacey remembers one particular morning walking into the kitchen to find her husband and three children (then teenagers) sitting at the kitchen table all reading dairy magazines – she described what she saw as a little surreal, funny and definitely amazing how the dairy life is a part of every minute of every day.

“I don’t know how or why Frank gets up seven days a week and does this, but it’s in his blood and he’s placed that passion in all three of our children.” Stacey said the men in the family have always passed on their passion and love for the dairy cow to the next generation. She said her husband is a great teacher and his father George is the same – both have passed on their love and dedication of the dairy industry to their children.

Alex, who is interning for Western United Dairymen this summer, intends to come back to Sonoma County after graduation and wants to see the ranch continue. She is young and enthusiastic about her family’s business with ideas about diversification and a passion to keep the Gambonini’s dairy in the family.

“Growing up on the ranch, it’s not just a possible career,” said Alex, “it’s a lifestyle.”