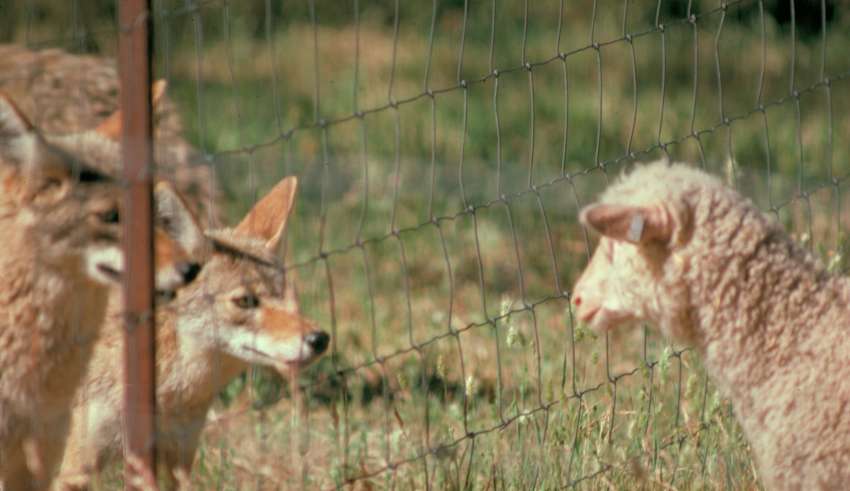 Good fencing is one tool that allows coyotes and sheep to share the open range.

State and federal policies once incentivized the removal of large carnivores, even offering bounty payments, Brashares said. The last California grizzly became a victim of such practices in 1922. The gray wolf was exterminated shortly thereafter, only to make a historic return 90 years later in the form of a single young male called OR-7, who has been followed into California by several other wolves.

Beginning in the 1970s with the federal Endangered Species Act and the banning of bounties, things began to change. Poisons and leghold traps were prohibited in 1998. Next came an end to the sport hunting of mountain lions in 1990, bear hunting with dogs in 2012, and bobcat trapping in 2015. The cumulative result of these actions, which eased centuries of pressure on wild animals treated as pests, has been a “quiet carnivore recovery” happening across our state, Brashares said. And depending on whom you ask, that may be a great thing or a terrible thing.

An ecologist or environmentalist might emphasize the role of carnivores in maintaining healthy ecosystems.

“What we’re seeing across the state, particularly over the last 10 years, is arguably an unprecedented recovery of our wildlife communities,” Brashares said.

A livestock rancher, meanwhile, might view the development with dread.

“They’re the ones most likely to be negatively impacted by the return of these animals.” A similar divide, he notes, exists between urban and rural dwellers.

“Those who face the challenges of coexistence with carnivores on a day-to-day basis tend to be more negative about their return,” he says.

The rest of us tend to view the return of carnivores — particularly large, charismatic ones — much more favorably.

In 2014 alone, nearly 50 lambs were killed by coyotes at HREC, and another 178 went unaccounted for. Meanwhile, 26 coyotes were killed to prevent further losses to the flock. Toward the end of the year, when Kim Rodrigues became director of HREC, she realized the current system wasn’t working and set about to fix it.

Rodrigues brought on more guard dogs and a new shepherd; she improved fencing, and changed the rules about shooting coyotes and other predators. She also initiated a number of research efforts, in which Brashares now plays a lead role, to critically evaluate the effectiveness of tools like dogs, fences, and “fox lights,” which are randomly lit on the fields to scare off predators. Brashares and Rodrigues are also studying how to better use technology like GPS, drones, and tagging to understand the often-mysterious behavior and movement of carnivores and their prey, in hopes of gaining new insights for human-wildlife coexistence.

After Rodrigues instituted some of these changes, the numbers of lamb and coyote deaths at HREC began to decrease dramatically. In 2016, fewer than five lambs were believed to have been killed by coyotes, with another eight unaccounted for, and just seven coyotes were shot.

In a bid to make HREC a statewide hub for cutting-edge research and discussion around human-wildlife interactions, Rodrigues enlisted Brashares’s help in December 2015 in hosting a community conversation with stakeholders about the management of wildlife and livestock using nonlethal methods. A second discussion is planned for this June.

“My research and extension focus is now on how we can start to explore standard operating procedures that actually have a stated goal to protect both the livestock and the wildlife, and not one or the other,” Rodrigues says. “It’s changing the either/or conundrum to thinking about how we really value both on the landscapes that we’re managing.”

Excerpted from the Spring 2017 issue of Breakthroughs, the magazine of the College of Natural Resources at the University of California, Berkeley. Read the full article.