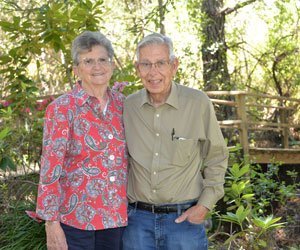 Dot and Earl Holtz will be inducted into Sonoma County Farm Bureau’s Hall of Fame on July 13th. The Holtzes, who have been married for 62 years, have spent the last 52 years in Sonoma County advocating for the dairy industry. Photo by Rachel LaFranchi.

Earl and his wife Dot came to Sonoma County in 1964 and have spent their lifetime supporting the dairy industry and educating the public about the importance of agriculture.

The past 52 years the Holtzes have committed to bettering the dairy industry and the future of Sonoma County agriculture have earned them a prominent spot in Sonoma County Farm Bureau’s Hall of Fame. The couple said they are honored to receive the award and in slight awe to be receiving the award alongside the other recipients. Sonoma County Farm Bureau’s award recipients this year also includes Jackson Family Wines who will be receiving the Luther Burbank Conservation Award for their commitment to sustainability and conservation; the Lee Walker Family who have been growing apples in Graton for over 100 years will be honored as the Farm Family of Year. The recipients will be honored at Love of the Land on July 13th.

Earl, 84, is originally from Pennsylvania; he didn’t grow up on a farm – his parents had owned a farm at one point but quit farming and went into the oil business. Earl came out to California one summer in high school with the intention to just stay for the summer, but he went to work on a dairy in the valley and never moved back to the East Coast. He said he stayed because he enjoyed working with the cattle.

Dot was born in Turlock and attending Turlock High School when she met Earl who was a year older than her. Earl was attending Ceres High School nearby and the two met when Dot’s sister married the son of the family Earl worked for.

“My father thought Earl was Mr. Wonderful,” said Dot, “I was not to go out with anyone else.”

Earl and Dot married on July 10th, 1955 – this year they will be celebrating 62 years of marriage.

After Earl finished his degree, he went to work for Topper Feed Mills in Fresno and then the Farmers Home Administration for a year. He resigned from the latter in 1963.

The following year, Earl and Dot moved to Sonoma County after George Bath hired him to work for the Cooperative Extension, specifically focusing on the dairy industry. For the next 10 years, Earl worked with dairymen throughout the county, occasionally also helping in Marin. Meanwhile, Dot taught at Rincon Valley Elementary school for 10 years. She taught multiple grades, starting in 2nd grade before moving to 3rd, 5th and 7th.

In 1979, Earl became a partner with Tom Nunez and Max Herzog, owners of a semen company called NorCal Sires. They did business across California also selling bulls to people in the Midwest.

The competition in the industry was tough, and in 1985 Earl quit the business and went to work for Western United Dairymen. Dot quit her job teaching and stayed to finish up with NorCal sires.

After NorCal Sires was phased out, Dot worked with Farm Bureau, where Earl has previously served on the board, to help set up their agriculture education program. She was a founder of Sonoma County’s ag in the classroom program, working with dairymen to bring animals to children and educate the general public. Dot recalls the program getting larger and larger until it became too large and Sonoma County Farm Bureau started Ag Days instead.

During Earl’s time working for Western United Dairymen, he covered Sonoma and Humboldt counties as well as the upper valley including Orland. He said he was working on constant problems with new and existing regulations.

Earl left his position with Western United Dairymen in 1999 after he was diagnosed with cancer. Although he no longer works in the dairy industry, he has managed to stay actively involved over the last 18 years.

Many people know Earl through his involvement in the Sonoma County Fair where Earl has announced the dairy shows every year since he retired.

Earl and Dot both continue to volunteer for Sonoma County Farm Bureau and other local organizations, and understand the importance of educating the next generation about agriculture.

“The dairy industry has been very good to us,” said Dot. “We’ve met a lot of wonderful people, and we just want to let them know how much we appreciate all that they have helped us do.”