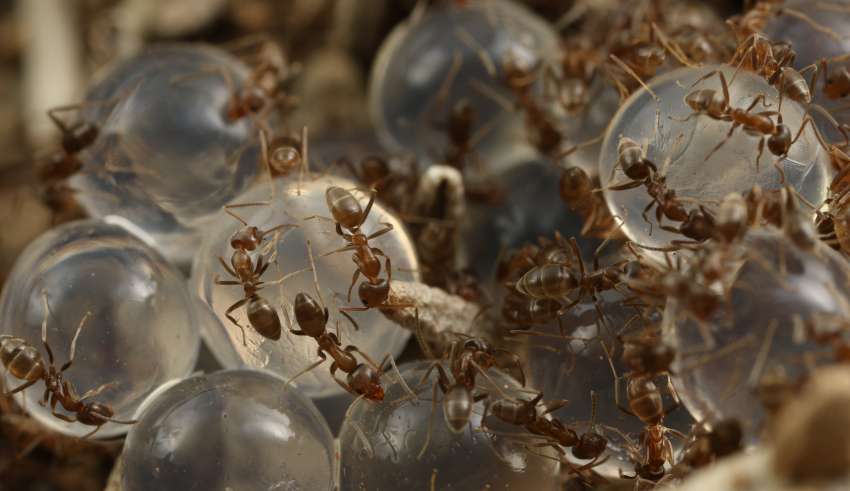 Riverside, Calif., (May 24, 2017) – Scientists at the University of California, Riverside have developed an inexpensive, biodegradable, seaweed-based ant bait that can help homeowners and farmers control invasive Argentine ant populations.

The researchers found the “hydrogel” baits, which look like liquid gel pills but have a jello-like consistency, reduced ant populations 40 to 68 percent after four weeks. After a second treatment, between weeks four and five, ant population reductions were maintained at 61 to 79 percent until the experiment ended after eight weeks.

“A 70 percent reduction is really successful, especially considering we are not spraying an insecticide but instead using a very targeted method that is better for the environment,” said Dong-Hwan Choe, an assistant professor of entomology at UC Riverside and an assistant cooperative extension specialist. “With 70 percent control, homeowners really don’t see any ants.”

Jia-Wei Tay, a post-doctoral scholar in Choe’s lab, is the lead author of the paper. Co-authors are Choe; Mark Hoddle, an entomologist at UC Riverside; and Ashok Mulchandani, a distinguished professor of chemical and environmental engineering.

In addition to the applications for homeowners in an urban environment, which was the focus of this paper, the hydrogels have applications in agriculture, including in citrus groves and grape vineyards.

This summer, the team will coordinate research in citrus groves in southern California. The team wants to measure the effectiveness of hydrogels in controlling Argentine ant populations. If the hydrogel baits can control the ants, the wasps can do their job protecting citrus trees from Asian citrus psyllid, which transmit Huanglongbing, a bacterial disease that kills citrus trees.

The Argentine ant is an invasive species with a worldwide distribution. It is a major nuisance in southern states including Georgia, South Carolina, Alabama, Mississippi, Louisiana, Florida, Tennessee, and North Carolina, and also in California. In fact, a 2007 survey found that 85 percent of all urban pest control services in California were focused on the Argentine ant.

A common method for managing the Argentine ant has been insecticide sprays. However, the downside of this tactic is that the insecticides can harm non-target organisms that do beneficial things. The misuse of the pesticide sprays can also cause environmental contamination.

As a result of these downsides, research has focused on liquid baits that use a combination of sugar water (to attract the ants) and a small amount of toxicant to kill the ants. The problem with the liquid baits is that they need to be dispensed in bait stations, which are costly to maintain.

“Hydrogels eliminate the need for the bait stations. The hydrogels are applied on the ground where the ants forage. Once an ant finds the hydrogel, it drinks from the surface of it. It then goes back to its nest and shares the toxic liquid with nest mates. The ants also create a trail to the hydrogels that their nest mates will follow,” Tay said.

The hydrogels are designed to be slow-acting, so it takes several days before the ants die. By that time tens of thousands will have ingested the liquid bait.

The hydrogels created by the team are highly absorbent – the material used is similar to what is used in diapers. They retain water so that they will remain attractive to ants for an extended amount of time.

The researchers used sugar water containing 0.0001 percent of the insecticide thiamethoxam in the hydrogels. “This is 100-fold less than it is used in a standard ant gel bait and 1,000 times less concentrated than spray insecticides containing thiamethoxam,” Tay said.

Future research will address the potential use of the hydrogels on other pest insects as well as how quickly the hydrogels biodegrade.

The article, published in Pest Management Science, is called “Development of an alginate hydrogel to deliver aqueous bait for pest ant management.” The research was funded by the California Department of Pesticide Regulation and the Early Career Chair in Urban Entomology Fund.