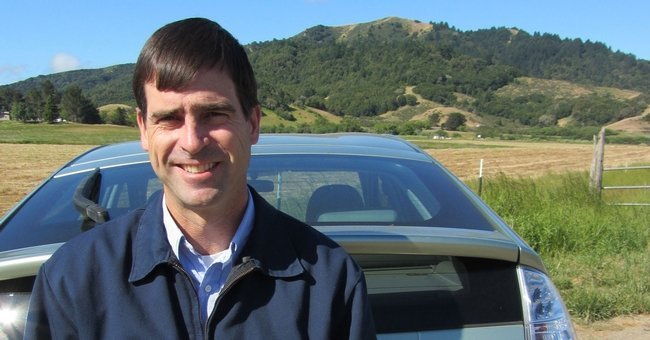 and UC Davis alumnus, is this year’s recipient of the Eric Bradford and Charlie Rominger Agricultural Sustainability Leadership Award.

For 17 years, Lewis has served as a UC Cooperative Extension advisor, helping farmers, ranchers, conservationists, and other stakeholders solve challenging and contentious issues surrounding the health of their watersheds.

The Bradford Rominger award honors individuals who exhibit the leadership, work ethic and integrity epitomized by the late Eric Bradford, a livestock geneticist who gave 50 years of service to UC Davis, and the late Charlie Rominger, a fifth-generation Yolo County farmer and land preservationist.

After starting his work in sustainability with the Peace Corps in Africa and completing a master’s degree in international agricultural development at UC Davis, Lewis joined UC Cooperative Extension as its first watershed advisor.

Tate praises Lewis’ ability to “put his quiet, honest, credible manner to good work” to help build trust and understanding so communities can have frank discussions about the challenges facing their watersheds.

Lewis’ accomplishments include helping to reduce the dairy pollution hurting the oyster beds of Tomales Bay and helping ranchers reduce erosion on their property, letting them play a key role in conserving critical coho salmon habitat and protecting the water quality of north coast rivers.

“I help my communities work towards a shared goal,” says Lewis, reflecting on his role as a leader.

“Marin County and places like it have placed a value on open working landscapes, and made land use policies 40 years ago to protect them. As we face new challenges, whether it’s a new invasive weed or where solar panels can go, we can always go back to that shared value.”

For Lewis, many of those successes stem from an eagerness to hear and understand the needs of community members, something he considers a privilege of his job.

“When talking with people at their kitchen tables or at the gates at their ranches, I get to feel the deep knowledge and connection people have with the landscape, hear their family histories and desires to innovate and do something different. And I appreciate that I’ve got a small role in it somewhere.”

Lewis will be presented the award at the Shepherds of Sustainability: Celebrating Leadership in Watersheds, Rangeland, and Livestock Sustainability event April 19 in Davis. The event is free and open to the public. Students are strongly encouraged to attend.

The Shepherds of Sustainability event will include an award ceremony and talks by David Lewis and keynote speaker Anya Fernald, CEO of Belcampo — a collection of organic ranches, butcher shops, and restaurants in California and an agritourism venture in Belize — on the topic of expanding awareness and access to sustainable foods. Fernald was recently recognized in Food & Wine’s “40 under 40” list and featured in profiles in The New York Times and The New Yorker, and has served as a regular judge on Iron Chef America.

More Information on the event and award can be found on the Agricultural Sustainability Institute’s website.