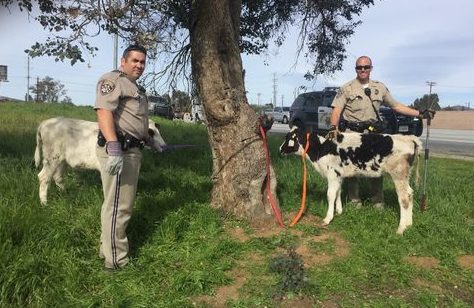 Palm Springs, Calif., (March 8, 2017) – Officers with the California Highway Patrol responded to an unusual call on
Saturday when 911 calls began coming in about a cow trying to climb out of the trunk of a Honda Civic on the shoulder of eastbound I-10 near Banning.

When officers arrived to the strange scene, the found one calf attempting to climb out of the open Honda’s trunk and another calf wedged in the back seat. Both calves had their hooves tied.

A Riverside County Brand Inspector with the Bureau of Livestock Identification – California Department of Food and Agriculture, helped officers remove the calves from the Honda. They haltered them under a large oak tree at that time.

Officers said the Honda had false registration tags and was registered to a residence in Tulare County, California. The car was impounded for evidence. The driver left the scene before officers arrived and hasn’t tried to recover the car from the tow yard.

Both of the calves were taken to a local ranch where they will remain while the brand inspector determines if and when the cattle were stolen.

Authorities said stealing livestock is a felony in California, and a conviction could result in thousands of dollars in fines along with up to a year in county jail.