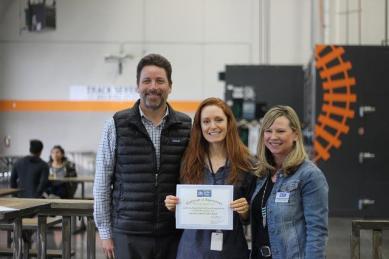 CDFA and its Office of Farm to Fork coordinated the food drive from late September to early February, along with their partners at the Sacramento Food Bank and Family Services and 108 different assistance agencies statewide. While much of the donated food was distributed through Sacramento, more than 100,000 pounds of food were donated to food banks and pantries outside the capital-area, eventually ending up on the tables of needy families throughout the state.

“I am impressed each year with the level of compassion and commitment that employees display when they donate to the food drive,” said CDFA Secretary Karen Ross, chair of the food drive. “Food brings people together, in particular during the holidays, when families and friends gather around the table. This program is so important in helping to make that happen for families that may need a little boost.”

The need in California is substantial. According to the California Association of Food Banks, 5.4
illion Californians contend with food insecurity,  which is defined as the occasional or constant lack of access to the food one needs for a healthy, active life. More than two-million of those people are children. That need is what motivates California state employees to commit to this effort each and every year.

employees of the Sacramento Food Bank and Family Services

Each year the Food Drive holds a wrap-up party with awards to highlight steps agencies have taken to make the drive a success. The Board of Equalization received an award for the greatest weight-volume of donations, totaling 166,689 pounds of food. Two new award categories have been added – for most creative fundraiser and for the biggest increase in donations from the previous year. CalEPA took home the award in the first category with its “Dream It, Build It, Give It” competition among employees building structures out of donated food.  The Sacramento/San Joaquin Delta Conservancy was honored for having the largest year-over-year increase, upping donations from 18 pounds to 912 pounds.