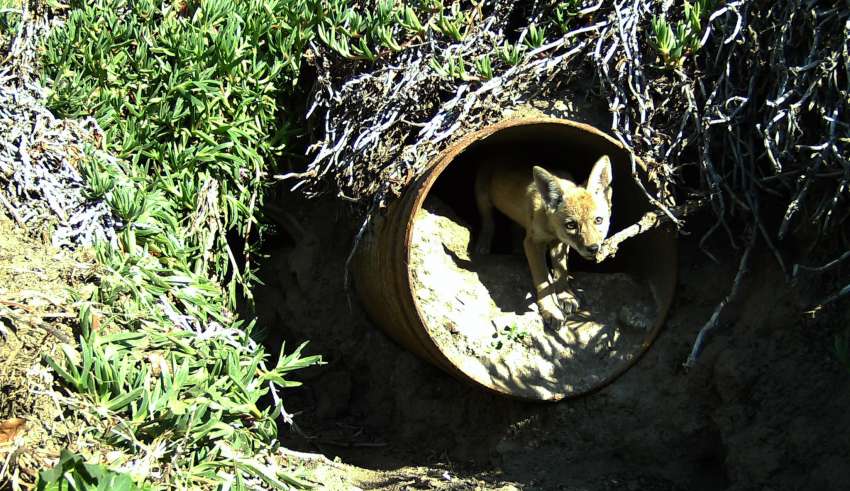 Davis, Calif., (February 17, 2017) – As urban coyote numbers rise, the animals are increasingly crossing paths with residents. There have been police reports of coyotes attacking pets and even people, but there has been no place to report casual coyote encounters. Now there is a new mobile app to help keep track of where those wily coyotes are coming into contact with people. Hikers and people walking their dogs can use Coyote Cacher, created by the University of California Agriculture and Natural Resources, to report coyote sightings.

“I’m so excited about this app because it will help us to collect better information on coyote conflict in California,” said Niamh Quinn, UC Cooperative Extension advisor, who studies human-wildlife interactions. “Coyote conflict appears to be particularly high in Southern California and it seems to be emerging in other areas. The information people provide through Coyote Cacher will help inform government agencies, wildlife researchers, park managers and residents to make better coyote management decisions.”

By reporting encounters with coyotes in their neighborhoods, residents can share information to help neighbors keep their pets and children safe.

“There is a coyote encounter map that will allow the public to keep track of what is happening in their areas,” said Quinn, who is based in Orange County.

Individuals can use the app to check a map to see locations of coyote sightings. Pet owners may decide not to let their pets out at night unsupervised in areas where coyotes have been reported.

“The app allows users to sign up for email alerts,” Quinn said. “These alerts – green, yellow and red – notify users when there is a coyote encounter reported in their zip code.”

Green is the lowest alert level and will give alerts for all coyote encounters in the user’s zip code, from sightings to a person being bitten. Yellow will not alert users about sightings, but will let them know about all levels of pet interactions, including pets being chased or attacked off-leash by coyotes, and red alerts. Red is the highest alert level and allows for users to be informed only about the more serious incidents, for example, a coyote attacking a pet on a leash or biting a person.

“This app will also allow me to gather baseline information on coyote activity and the success of community hazing,” Quinn said.

Community hazing involves people shouting and waving their arms at coyotes and generally being obnoxious to make the nuisance animals afraid of humans.

“It would be great if everyone would do this when they see a coyote, but at the moment this is not really happening,” Quinn said. “Also, coyotes in Southern California appear to take a lot of risks and come in close contact with humans so community hazing may not deter them.”

More intense hazing, like shooting them with paintball guns, might be more effective techniques for government agencies to manage urban coyotes, she said.

To find out if any of these techniques work, the UC wildlife scientist would like to put collars on urban coyotes to study whether the animals move away from locations after hazing.

“We are seeking funding to collar coyotes to find out more about their activity and social structure and how they react to different types of management,” Quinn said. “We would need to figure out if the effects of the hazing are long-lasting, or if the coyotes just revert to ‘bad behavior’ when the hazing is stopped.”

Although Quinn’s research is focused on California, Coyote Cacher can be used anywhere in the United States. The website also offers information about urban coyotes.

Coyote Cacher can be used on a computer or on a mobile device at http://ucanr.edu/CoyoteCacher.

The Coyote Cacher app was designed by UC ANR’s Informatics and Geographic Information Systems and funded by UC Cooperative Extension in Orange County.