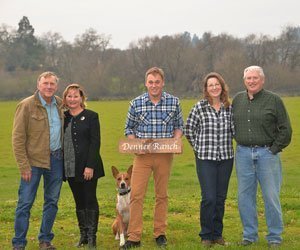 Santa Rosa, Calif., (February 10, 2017) – Denner Ranches, established in 1890, is operated by Kathy Reese and her husband Steve, Russ Denner and his wife Joanne and their son Brian Denner.

The property was purchased by Reese and Denner’s great grandfather who emigrated from Devonshire England, originally settling in Illinois before coming west and deciding Santa Rosa was the place he wanted to live.

The ranch was purchased in two parts, with the second half acquired in 1935. When the original piece of property was purchased in the 1890’s, it was growing winegrapes, but the vines were removed and the ranch transitioned through many other crops. Over the years, the ranch has raised horses for the U.S. Calvary, hogs, potatoes, hops, beef and dairy cattle, corn silage and hay.

The family is currently growing 42 acres of Russian River Chardonnay. Additionally, the property has 258 acres of organic pasture most of which is leased to a local cattle company, but the family also runs their own small herd of cattle on the property. The remaining 180 acres are leased to a farmer growing vegetables which include squash, peppers, tomatoes and other seasonal items.

While Kathy is passionate about the cattle and said she couldn’t see herself without them, Russ describes himself as the instigator of the vineyard. The 42 acres of winegrapes brings the property full circle, back to what it was originally planted with when the family purchased the land more than 125 years ago.

Russ’s son Brian, 29, joined the family business in 2013. He grew up on the ranch attending El Molino High School and Santa Rosa Junior College before working in security and construction. He was partway through the hiring process with the Richmond police department before deciding to come back and spend a year working on the family farm. He fell in love with the farm and has continued to work in the vineyard and is involved with day to day operations.

Brian’s son, Silas, is six and will be the sixth generation of the Denner family to grow up on the property.

“It all worked out,” said Kathy, “timing is everything. Our fathers worked hard to build this ranch.”

In 1994, Kathy and Russ returned to the property to take over the day to day operations. The family transitioned 46 acres of the property to vineyard in 1996. Russ said the family would have expanded more but were restricted due to the tiger salamander and the regulations surrounding it.

“For farming to be sustainable you have to be able to change crops,” said Russ which has been vibrantly demonstrated by the family over the last 100 years. “The tiger salamander has made it so you can’t till the ground. We’re stuck with pastures we can only run cattle on.”

The family has been working with NRCS on various projects and has had their pastures certified organic. They have also worked with the City of Santa Rosa to use reclaimed wastewater since 1976.

The ranch has been used as a filming location for movies as wells as local sheriff’s department trainings. The Reeses are actively involved in Sonoma County Farm Bureau, where Kathy Reese sits on the board of directors, and are committed to ensuring future generations have the ability to farm in Sonoma County.

“The scary part,” said Russ, “is not knowing how we’re going to keep going and change crops.”

Kathy said, “How do you plan for succession when you don’t know how you’re going to survive?”