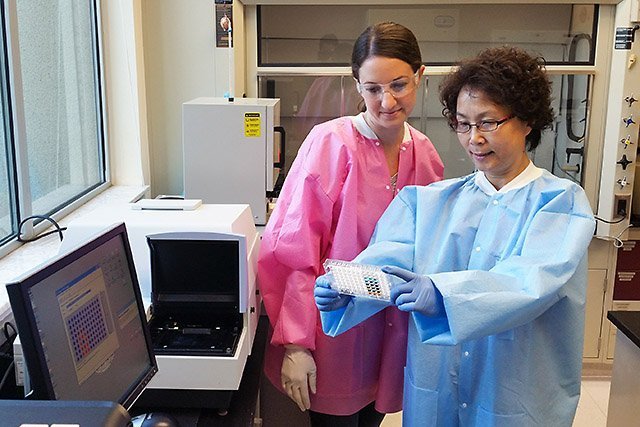 According to the Centers for Disease Control and Prevention, STEC bacteria are responsible for more than 265,000 cases of illness and 3,600 hospitalizations each year in the United States. Nearly 8 percent of patients hospitalized from these infections develop hemolytic uremic syndrome (HUS), a life-threatening disease.

Most people have heard of E. coli O157:H7, which is often the cause of publicized foodborne outbreaks. However, many other kinds of E. coli can cause disease.

Several commercial tests are used to detect these bacteria, but none are capable of recognizing all STEC. Antibodies used in current tests only recognize a subset of Shiga toxins but not all Shiga toxins.

Tests using the newly developed antibodies are very sensitive. They can identify all known subtypes of STEC and rapidly detect new and emerging serotypes, according to molecular biologist Xiaohua He. They also can be used to screen foods early on for contamination.

Additional studies have shown that these antibodies also can detect Shiga toxins in blood, an indication that they can potentially be adapted as therapeutics for human diseases caused by Shiga toxins, according to research leader Luisa Cheng.

Read more about this research in the January 2017 issue of AgResearch magazine.