Monday , 28 November 2022
Home News Dairy Industry Flooding and Waterlogging Damage in Alfalfa – What to Do? 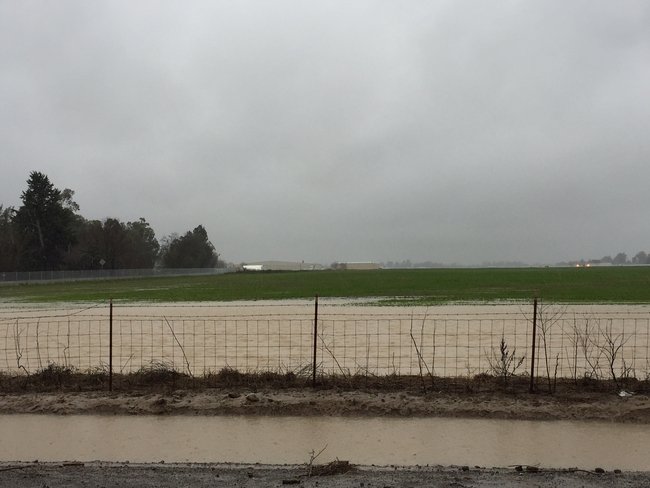 Such has been the case in northern California, which has seen torrential rains in recent weeks. After 5 years of intensive drought, the 2016-2017 rains are a welcome relief, but pose a danger to many crops including alfalfa.

Ah, the ups and downs of agriculture!

What are the mechanisms for flood damage? Alfalfa grown in Mediterranean and desert climates is still alive, green and growing during winter periods and thus subject to water damage during floods. This is unlike colder regions where alfalfa is very dormant and brown during winter months (but damage can occur in those areas as well).

The extent of either death or damage depends upon temperature, drainage, alfalfa growth status (young vs. old, active vs. dormant), and duration of flooding. The mechanisms for damage include:

How long does it take to do damage? This will depend upon variety, temperature and soil drainage characteristics. Dormant varieties under cold conditions may tolerate some submersion for several days; actively growing plants less so. Sometimes it could be months before damage is noticed.

What to do?  After the intense flooding, when fields have drained, inspect roots and crowns for damage caused by anaerobic (without oxygen) conditions in the soil. Dig up roots and examine their health. Do you see greater disease in crowns or center of roots? Roots that are soft and compress easily when squeezed may be damaged beyond hope. If roots are beginning to release a strong odor, they likely won’t recover. If roots are white, they may Assess your stand-if the plants recover, will you have an adequate stand? Dig up roots and see if soil impediments have caused greater damage 12-16” below the surface (root pruning). Keep an eye on the plants, inspecting for damage and yield throughout the following summer; sometimes disease development is delayed with weakened plants succumbing to damage months later.

Seedling Fields. Newly-seeded fields, especially those seeded late in the previous fall, are the most susceptible to damage from saturated soil conditions. Seedling alfalfa has small weak roots which can die quickly from oxygen deprivation. Seedling plants are also much more susceptible to diseases such as Phytophora and Pythium.

NOTE: water damage in poorly-developed new stands should be a STRONG message about the advantages of early fall or late summer seeding, e.g. August-September – these fields are a lot less susceptible to cold and flooding damage than November-planted seedlings.

Established Fields. Established fields can exhibit loss of stand, greater weed intrusion, and have lots of disease issues under flooding conditions. Nematodes are another problem in addition to oxygen deprivation.

Lack of oxygen, disease and weed intrusion are the main problems with flood-damaged alfalfa.   There are some over-seeding and inter-seeding options to consider, but allowing sufficient time for the crop to recover and treating the crop well during the recovery period is critical to allow sustained forage production after the damage has occurred.