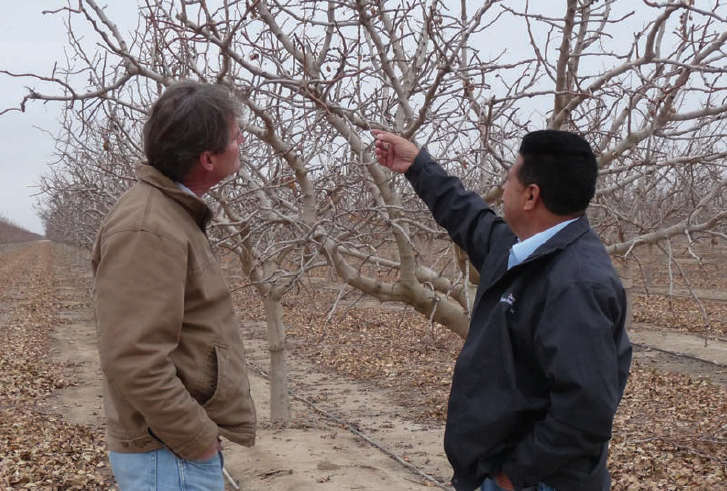 California pistachio industry lore tells many interesting tales of pioneers developing the Westside of the San Joaquin Valley and beyond during the 1970s. These rambunctious stories narrate pistachio growers’ stories of their hard labor in starting their orchards.

Many farmers arrived later to join the dynamic industry and found good places to farm the crop. One such farmer is Brad Gleason, who along with his partner Gregorio Jacobo, co-own West Hills Farms Services, Inc. in Fresno. They have carved out vast pistachio acreage and some almond orchards, and established farm management companies that take several CPAs hovering over spreadsheets to keep up with.

In fact, Gleason who graduated from the University of Pacific as an accounting major, was a CPA for the first four years after college. “It was a great opportunity when I started working for the 10,000-acre Allen Ranch in Coalinga, which farmed cotton, grain, cantaloupes, corn and beans. Part of the operation was in Westland’s Water District, while the balance was in Pleasant Valley northeast of Coalinga.

At the time, in the mid-1980s Southern Pacific owned and leased out more than 100,000 acres on the Westside. Due to acreage limitation legislation passed by Congress and enforced by Bureau of Reclamation, no person or farm entity could own more than 960 acres. As a result, Southern Pacific began to sell its land holdings to its tenants or their key employees. If Allen Ranch had purchased all the property they were leasing from Southern Pacific, they would have exceeded their own 960 acre-allotment per family member.

So while Gleason served as president of Allen Ranch and Bob Viets, the ranch manager, both were able to buy a combined 640 acres in Westlands Water District in 1988. “We called it Double B Farms and at the time we were just farming row crops, but gradually transitioned over to permanent crops starting in 1995 with small pistachio and almond blocks of 40 to 80 acres each,” said Gleason.

“After our first pistachio planting, we had about 30 pistachio trees left over from the project and decided to plant them in our 200 acres of row crop ground in Pleasant Valley, north east of Coalinga,” said Gleason. “We did not have surface water deliveries in Pleasant Valley, so we were going to have to rely on well water. However, Bob had read in a UC publication that pistachios were salt tolerant and would probably do okay on well water, which tends to have higher salts,” Gleason said. “We grew them for one year and they were doing fine, so we planted another 40 acres of pistachios as we moved out of row crops.

“It was still just an experiment growing pistachios in Pleasant Valley so the banks were not lending money,” said Gleason. “Today there are more than 10,000 acres in the Valley.”

Around 1995, Jeff Gibbons (of Setton Farms) introduced himself to me at what was then the California Pistachio Commission meeting in Monterey.  At the time, Double B Farm’s pistachio acreage was not in production but we attended the annual meeting as we explored opportunities. Gleason found that Gibbons was looking for expansion of the Setton Processing Plant in Terra Bella, Calif.  “Setton Farms owner, Josh Setton, was willing to help us plant the balance of the 200 acre block and we formed Pleasant Valley Pistachio, which has now grown to 500 acres of pistachios,” Gleason said.

Eventually all the Double B acreage, which was mostly devoted to cotton, sugar beets wheat, tomatoes, beans, and cantaloupes, was converted to pistachios and all the row crop equipment was sold off. Then Gleason and Viets formed West Hills Farm Services to provide equipment and labor services to Pleasant Valley Pistachio and other companies that had been formed to grow pistachios in the Coalinga area. Viets handled the day-to-day farm operations until his retirement in 2007.

Meanwhile Gregorio Jacobo was doing West Hills pruning work, and he was so knowledgeable of pistachio farming from planting, budding, and training to irrigating and pruning, he stood out for Gleason, and the two became partners in West Hills Farms Services. “He really knows a lot about the trees,” said Gleason. In fact, Gregorio has done pruning and irrigation experiments in the field to see how the trees would respond. Gregorio has been a big help in expanding our operation.

Today the company farms about 11,000 acres of pistachios, with 1,000 acres of almonds. Helping out in every aspect of farming is Jacobo, who also works alongside his brother and son as Jacobo Farm Services—a custom farming company similar to West Hills Farm Services.

In 2012, Gleason became part owner and CFO of Primex Farms in Wasco, a major pistachio processor and marketer, and part owner of Primex’s domestic brand Nature’s Joy, which is emerging as a major brand in the domestic retail sector.

“Historically Primex had a strong export presence throughout the world and we needed a domestic presence,” noted Gleason. Consequently, last year, Primex launched Nature’s Joy, a brand sold in various retail packages. “We are developing a domestic market strategy for the brand to begin establishing our brand now and develop the necessary relationships with retail,” said Gleason  “As the California   pistachio production doubles over the next seven years, we are looking forward to and trying to be ready for the billion pound crop”,

“We have expanded the Primex plant to 60 million pound capacity—representing about 9 percent of the market. And we have plans to expand another 20 million pounds, said Gleason. “Primex is the only company that has a pool for marketing the pounds delivered by our growers. We charge a processing fee and sales commission, which are subtracted from the year-end pool price. The structure allows for growers to enjoy the rewards in good markets such as in the last four years.”

Information is something Gleason is always seeking, and one day in 2000 he met Ali Amin, president of Primex International. “What intrigued me about Ali was that he was a 4th generation pistachio grower from Iran who had established acreage in California. He knows a lot about the history of pistachios, and I knew I could learn a lot from him” Ali had built a successful trading company to that point, but his Wasco plant would not be built until 2002.

Ali was writing monthly market reports for both almond and pistachio customers around the world. I asked why not send that to California growers to help them learn about how the pistachio market was working. And that is exactly what Primex did and continues to do today.

“Today West Hills Farm Services own 4,500 acres of our own in partnership with different people in and around the Coalinga area. We farm another 7,500 acres for Ali Amin and his family in Madera, Panoche Water District near Firebaugh and the Lost Hills area,” said Gleason.

“Our #1 strategy is having good wells to pump water and not relying on surface water, whenever possible. Fortunately the salts normally found in well water are not a problem for pistachio trees, unlike almonds,” Gleason said.

“Pleasant Valley has about 20,000 farmable acres. It’s in an enclosed basin with potential recharge from surrounding mountains,” noted Gleason. “Our irrigation is all from wells, and in our area of the Valley, we are not seeing overdraft issues. We have been farming for 25 years, and before we started, the area had been farmed for 50 years–always with well water.

“We think we are in a very good position where we are farming, and that’s because we only farm where there is adequate well water,” Gleason noted. PNP

Gregorio Jacobo is the executive farm manager for West Hills Farm Services, overseeing all 12,000 acres of pistachios and almonds.

“Our company has about 25 different farming companies representing some absentees as well as big operations such as Setton and Primex,” said Brad Gleason, who oversees the administration of West Hills. In order to do budding, tying or pruning, we engage Jacobo Farm Services to provide important labor.

Jacobo employees work year-round with West Hills. They understand pistachio farming and all that goes with it. “It’s a great service that West Hills relies on,” said Gleason.

“We also have 30 sets of pistachio harvesters, and the importance of that is we are not waiting for anyone,” noted Jacobo. “Our clients have the benefits of custom farming, which include spraying, all tractor services and all intensive labor services such as budding, pruning and training.”

And Jacobo, who has probably planted and budded 40,000 acres of pistachios, oversees all the crews. “We even do all of the drip irrigation installations for our orchards and for the orchards we manage or develop,” Jacobo said.

“To keep it all straight, we have an in-house lawyer and two CPAs who do all the billing and banking, and they send out monthly financial statements for all of our clients,” said Gleason.